Cryptocurrencies Like Bitcoin: Is it Money or an Asset?

The volatility of Bitcoin has triggered and prompted major financial institutions like JP Morgan and Citigroup to ban purchases of Bitcoin and on their credit cards. This does not necessarily mean that the large banks will stay away forever.

Barclays and Coinbase and Barclays just recently revealed a first major partnership between a U.K. bank and cryptocurrency exchange. This partly due to Coinbases’ effort to offer its clients a safer and faster payment and transfer process.

Another move, worth mentioning, is that banks and financial services firms are thinking about possibly using a blockchain as a record of asset ownership replacing a series of internal ledgers. The basic idea is to develop a tamper-proof database that is also less expensive that a conventional database.

The idea is to make tamper-proof databases costing a lot less than a conventional database.   Santander Bank estimates that blockchains could save banks up to $20 billion a year by 2022.

Now theoretically, cryptocurrencies’ underlying blockchain technology eliminates the necessity of a third party and allows for instant, irrevocable and secure transactions. Yet, bitcoin and cryptocurrency was purposely designed with anonymity and lack of control in mind (think money laundering and terrorism financing), and user/consumer security and protection was not the main focus of the original protocol.

This one of the main reasons (although there are more) why regulators around the globe have been widely examining bitcoin and other cryptocurrencies with a critical eye. According to reporting from Coinlist.me, Japan just shut down two more cryptocurrency exchanges and penalized at least six exchanges last month for poor anti-money laundering and cyber security controls.

Getting your head around cryptocurrencies was hard enough before governments got involved. But now that policy makers around the world are drawing up fresh regulations on everything from exchanges to initial coin offerings, keeping track of what’s legal has become just as daunting as figuring out which newfangled token might turn into the next Bitcoin.

Check the map graphic from Bloomberg to see which countries are regulating the hardest. 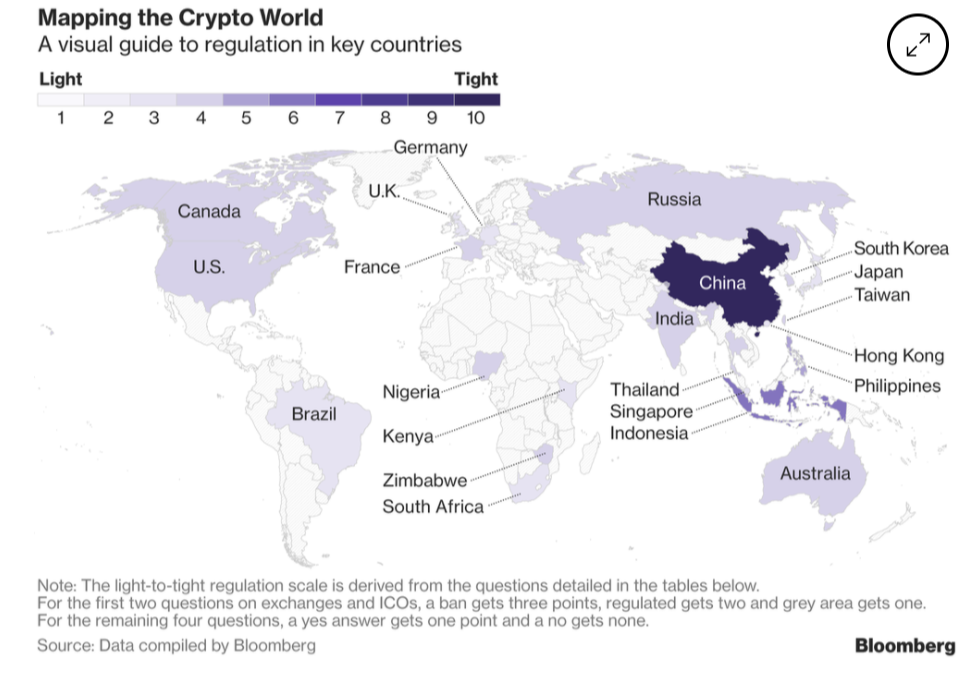 Is there a Cryptocurrency New World Order Coming?

If cryptocurrency is indeed an asset class, then there is a need to have cryptocurrency exchanges to trade one coin or token for another, with the concept of digital encryption providing individuals with control of their data, privacy, security and fluid transfer of assets.

The cryptocurrency world seems to envision that a “new internet” is needed for a new “decentralized world” to make it happen, which is a popular goal of Pied Piper on the HBO show Silicon Valley, but unfortunately is yet to be invented and or created in reality.

As of where we are in April of 2018, Cryptocurrencies have become much more popular as a trading instrument than an actual payment system. Now one day Bitcoin and cryptocurrency may become the virtual currency substrate for online transactions on this “new internet" in this new “decentralized world,” but this not what is happening now.

Billionaire Venture Capitalist Peter Thiel, has placed a bet and amassed hundreds of millions of dollars of the volatile cryptocurrency. “While I’m skeptical of most of them, I do think people are a little bit underestimating bitcoin, specifically, because it is like a reserve form of money,” Mr. Thiel claimed at an investment conference crowd in Saudi Arabia last October. “If bitcoin ends up being the cyber equivalent of gold, it has great potential.”

Of course, wealthy investors can afford to take more risks. Things that are good financial investments don’t make good currencies, and vice versa. Things that make good long-term stores of value, like stocks and real estate, tend to fluctuate in value in the short term. Short-term volatility is bad for payments, especially if it takes time to confirm a transaction, as in Bitcoin’s case, because you don’t know how much you’re actually paying for things. The price fluctuations of Bitcoin for processing transactions is why the popular Stripe online payment provider ended support for it recently.

Bitcoin is where it is mostly thanks to public awareness and branding. Yes, you can buy a pizza with it from some places, but that pizza may easily cost you $50 or more.  That's not so bad when you are using it to buy a car, but you might spend as much time waiting for your transaction to clear as you do with the finance guy.  Slow and expensive is no way to run a program. (and this says nothing about the cost of mining the coins).

So, clearly, bitcoin will make way for something better, even it has the upper hand at the moment.  Logically, the most likely candidates will be the ones that can gain notoriety of their own, have lower transaction costs and faster transaction, and don't threaten to consume an appreciable percentage of the world's energy solving math problems.  Long term, I could see Bitcoin maybe being a store of value, which would limit the transactional cost problem.

I cover and write about topics such as entrepreneurship, conversion optimization, digital marketing tips and strategies for the startup and investor community.    Co founded Vab Media a digital marketing startup agency in New York.  I consult VC backed startup businesses with Internet marketing guidance. A known growth specialist, aiding companies with the expansion of their branding, visibility, and customer experiences online through a variety of strategies. I build and optimize many profitable websites, some of which hold first page rankings for major keywords in Google. I have experience with writing branded content for search. I also specialize in identifying and capturing profitable niches across a wide variety of subject matters. Generally helping companies 'ring the cash register' online. I lead our data-driven SEO team providing strategy, overseeing processes, providing training and testing the latest SEO strategies to improve conversion and revenue for all of our clients. I have been interviewed and quoted in the Wall Street Journal, ABC News, LA Times and Bloomberg BusinessWeek. A contributor to Entrepreneur Mag, The Next Web, Econsultancy, Tech.Co Startup Grind, and Google for Education.