Genius in Madness? 72% of Entrepreneurs Affected by Mental Health Conditions

“No great mind has ever existed without a touch of madness,” said Aristotle.​

Imagine a bell curve that accurately represents the creativity of American adults. It would show a “normal distribution,” meaning it would be shaped like an upside down ‘U.’

The raised hump in the middle symbolizes those of an average level of creativity, where most of the population lie. It’s a  comfortable spot, with plenty of company and lots of good conversation, but it doesn’t inspire greatness or lethargy. Entrepreneurs would quickly become bored here.​

The lowest points on either end of the distribution represent the 'outliers' of our society; on the left, those who are below average in creativity and on the right, those above average.

In these polar positions, life is a little lonelier than in the well-saturated middle, but it’s also potentially more exciting. Entrepreneurs often occupy that lower right corner of the bell curve, standing out from the crowd not just with uncommon ability, but also with extraordinary weaknesses.

The Dark Side of Creativity

Creativity is like a double-edged sword. From Poe to Tesla, it’s no wonder that some of the greatest minds throughout history have been considered a bit “off.”

The entrepreneur is often represented as a go-getter with limitless ambition and an inventive mind. Over time, these innovators and risk-takers have shown a kind of fearlessness that many never experience. And throughout history, some of the most genius creators and thinkers have, less famously, struggled with mental illness.

This year, researchers at the University of California studied the link between entrepreneurship and mental illness. Their results don’t necessarily reveal the truth about entrepreneurial genius. Instead, they start an important conversation about the lesser-known dark side of the enlightened mind. What’s on the other side of genius? 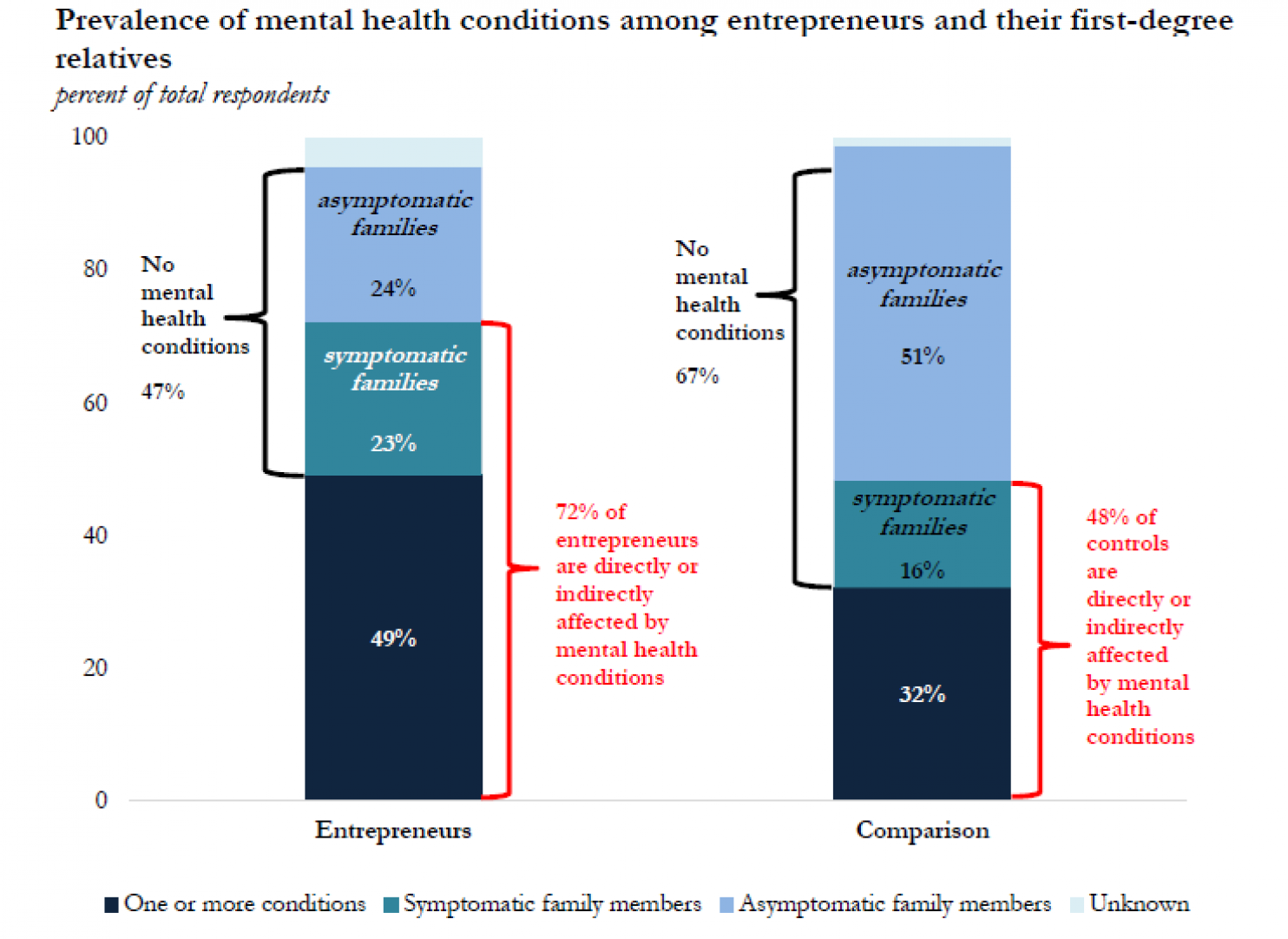 By comparison, only about 32% of all adults in the United States report being diagnosed with one or more mental illnesses.

Is it just coincidence that the most brilliant minds are sometimes the ones that struggle the most? Michael A. Freeman of the University of California doesn’t think so.

The lows of depression might give way to smart solutions and ideas. A manic episode can sometimes enlighten. ADHD prompts fast decision-making. And combined, these struggles may incubate tremendous creativity that inspires would-be entrepreneurs to take a chance on their ideas.

Psychologists like Michael Freeman from the University of California’s study above recommend that more research be done to further build the evidence of the link between mental illness and entrepreneurship. ​

Until then, entrepreneurs would be wise to take care of themselves wholly--physically and mentally--and accept that the very traits that make life seem unusually difficult at times are likely the same ones that allow them to stand out so brilliantly.

I'm passionate about being creative. I create smart, compelling content for brands and offer content strategy consultation services. I've written about startups, small business, entrepreneurship, women in business, sales, and even motherhood. I contribute to Huffington Post and Startup Grind, and live near Nashville, TN with my husband and daughter (and 2 apathetic cats).