How a Facebook Community Manager Made a Whole Country His Fans

Hundreds of products launch every day and compete for success. The ones that survive demonstrate product market fit. To succeed, startups continuously talk to users and reiterate the product to improve user experience.

Companies like Product Hunt have grown fast in 2 years, working directly with makers, evangelists, and users to better the site. CEO Ryan Hoover has focused heavily on the foundations of building a strong community at Product Hunt since this has been the core of their growth and rapport among product enthusiasts.

Very few organizations can run successful communities like Product Hunt. However, even a government entity, accused of crimes and corruption, once blew up on Facebook with positive comments. Needless to say, this isn't common in politics. I was very surprised since this government entity, the Peruvian National Police, was linked to his crimes, becoming one of the public organizations with the lowest approval rate in the country.

When I was a kid, I lost faith in my government. The late 90s was a chaotic time in Lima, Peru. Collaborating with public entities, the former Peruvian president, Alberto Fujimori, stole millions of dollars from the government.

A 2009 government report found that 11,876 public officials had been accused of corruption-related charges since 2002, concluding that the national police is the second most corrupt institution in the country.

It’s quite unfortunate that government corruption has become part of people’s daily lives. Many Peruvian police officers have actually done an outstanding job to make the city safer and deserve more respect. Nevertheless, getting people’s trust and faith back after a scandal is difficult.

Who would think that Facebook Community Manager could revive a trust lost decades ago?

“Friday May 13… but for the criminals.” A little unexpected - even funny - coming from the national police, isn’t it? 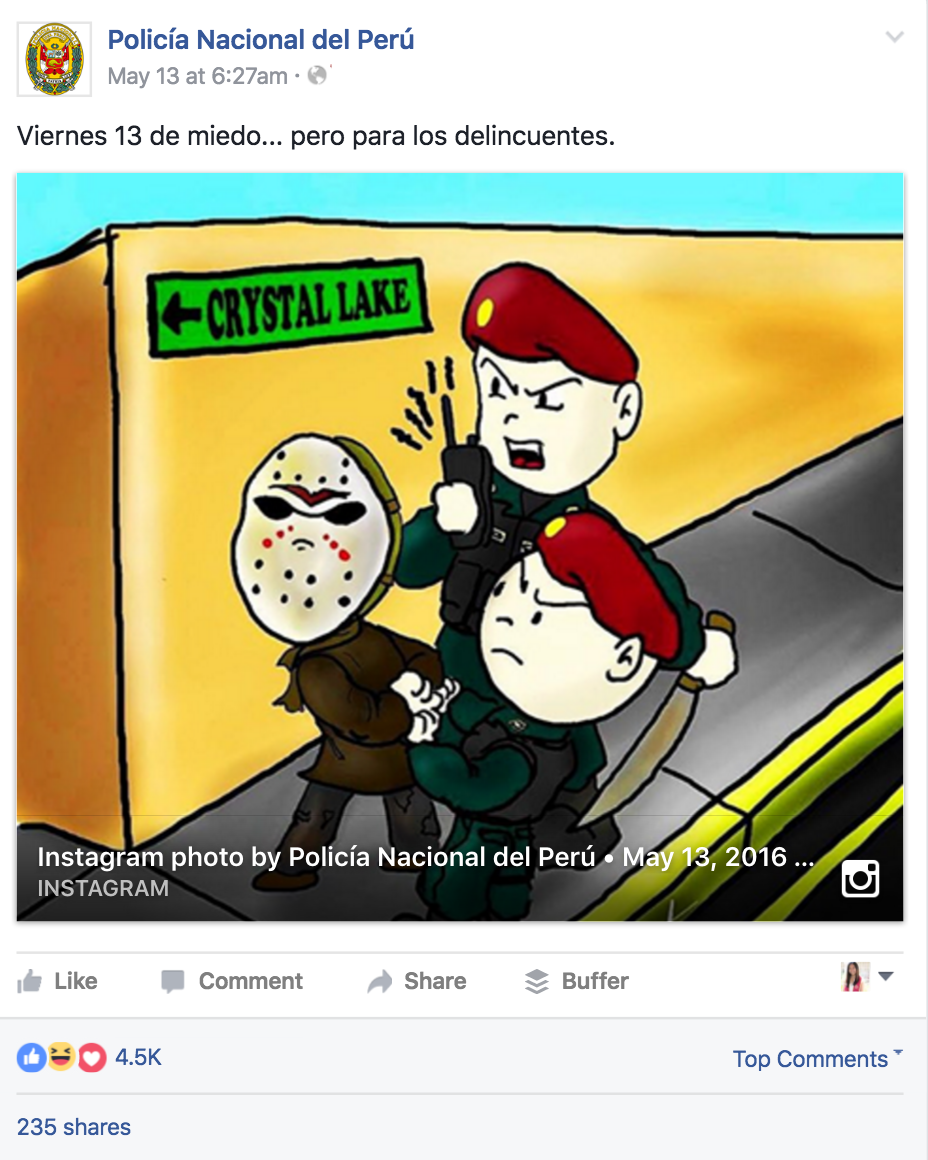 This post reminded me of Gary Vaynerchuk’s Jab, Jab, Jab, Right Hook, a blueprint to social media marketing. Whenever I write, I always try to remember Vaynerchuk’s quote:

Today, many social media community managers plan for the “right hook” to knock out competitors. They focus on building relationships and on creating the best quality content. Sometimes, these two combined work perfectly, bringing in direct leads. But what happens when this combination doesn’t work?

Delivering great content isn’t enough. It is important to understand each social media platform. Think about who is on it all the time, how it behaves, and how people consume content. Creating quality content specific to the platform can change your social media strategy.

Amazing jab and work by this community manager.

Building a community is an opportunity to listen, care, and share

A community wants to be heard. People like to feel special, understood, and welcomed. The Facebook page did an outstanding job in creating content that would get people invested and be part of the stories.

“This page has given our police force the credibility they currently lack. If all the cops shared the Peruvian police Facebook page tips and updates, things would be different. We would be a better country.”

The page shares tips and updates that most people don’t know about in a way that most Peruvians would relate to. Using memes and satire was smart since it is part of the pop culture and searched all the time.

This leverages credibility and trust. These folks were getting personalized help, which made them feel special. This strategy can be applied to your startup as well. Here is how:

Community management is the core of user experience (UX)

Not everyone is going to like your new product feature. Many people adopt new apps and when they become used to it, they hate the idea of change. On the borderline of losing a user due to change, community managers play a key role on giving people an opportunity to connect with your team and product.

If users have a bad UX, they will remember the feeling that they went through when they tested out the product. These emotions are difficult to forget.

Just like how this Facebook Community Manager understood the audience and made citizens involved in making the community better, your startup can follow this approach. Have your team serve the role of a community manager, and you’ll see positive results.

Your user engagement will be much stronger, while getting valuable feedback.