Share on TwitterShare on FacebookShare on LinkedInShare on PinterestShare via Email
PatrickMaloney | 2015-06-08T18:50:39+00:00
Music related startups seem to be a dime a dozen nowadays. Rdio, Spotify, Jay-Z’s Spotify Clone Tidal, Soundcloud, Crossfader, and Music Messenger are just the latest in a slew of apps meant to make finding, listening, and sharing music a more seamless and enjoyable process. The artists themselves seem to want in on the boom with the likes of Nicki Minaj, David Guetta, Tiesto, will.i.am, and Avicii becoming recent investors in the space.

Apple is even set to announce their own version of a music streaming app this week.

But where did this frenzy begin? When did companies start battling for the best content, worry about who has the most accurate matching algorithm, and debate the value of lossless streaming? Invariably it began with the explosion of Pandora’s insanely popular internet radio.

When Pandora first launched it was a magical product. It knew what every song in the world sounded like and would only play you similar songs to listen to. Love “Eleanor Rigby” by the Beatles? Get a tailored radio station that only plays songs musically similar to "Eleanor Rigby" for free! Genius. It now plays an average of 25 minutes of content a day per user for over 90 Million Active Listeners.

Pandora’s origins though are far more humble. It didn’t begin as a traditional startup company looking for a mvp and product market fit as quickly as possible but as a project called the Music Genome Project. A project thought up by Pandora’s very musical co-founder, Tim Westergren. 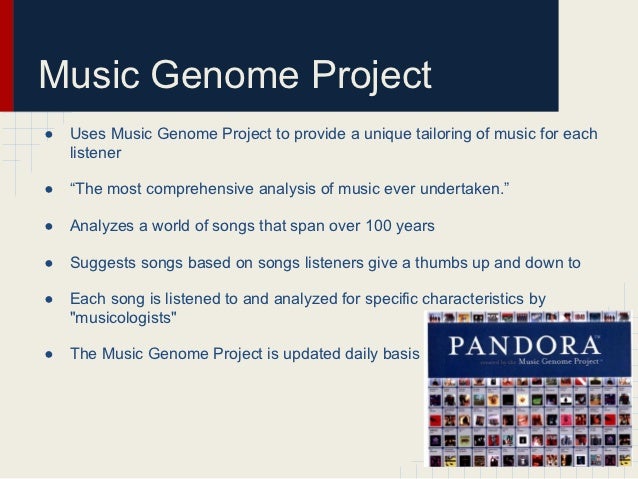 Speaking at Hustlecon in April, Tim described the remarkable story of survival and invention that is the founding of Pandora:

Westergren chose to be a Political Science major at Stanford University when he arrived there via Minneapolis in the late 80’s. He stated it was a "choice made primarily because it was the shortest major at the university" which allowed Tim ample time to practice being a musician outside of his primary studies.

After graduation however, this choice presented itself to be a bit more problematic. Westergren couldn’t find a job. He wasn’t interested in pursuing a career in Politics or any of its ancillary disciplines so he called upon another passion of his, children, and became a manny.

For the next 5 years, Westergren would play piano until 2 in the afternoon and then pick up “his kids” from school, play whiffle ball in the street, make dinner for the whole family, and then play piano again in the evenings.

After paying his dues on the practice circuit between his living room and kitchen, Westergren became a “real” working musician playing with rock bands and various traveling groups for 7 years. It was during this period that Westergren gained the first of 2 pieces of knowledge he says were instrumental in founding Pandora.

“I encountered a sea of undiscovered talent”

He was working with artists from across the country with great sounds and potentially mainstream popular music but with no way of getting discovered.

After leaving the life of a journeyman musician, Westergren attempted to break into the more sophisticated life being a Film Composer. Starting with small student films Westergren eventually landed a gig as a feature film composer. Part of the role required Westergren to watch films complete with dialogue and sound effects but devoid of music alongside the film’s director. He had to determine the best musical fit for the film while playing to the musical taste of the director.

With dozens of CD’s listened to, Westergren would build a complete “musicological profile” or "musical Myers-Briggs" of the director’s taste. Understanding their nuanced preferences and tastes.

As with many great ideas, Tim was then struck with a lighting bolt of ideation that connected musicological profiles and undiscovered music:

The similarities between known and unknown songs could become a kind of connective tissue in which users would serendipitously discover new music.

Westergren felt he could create an entire taxonomy of musical attributes that could then be codified into a technological system.

Luckily for the world, Tim pitched the idea to his friend Jon Kraft who by then, had already founded and sold a company called the Stanford Technology Group. Kraft immediately recognized the opportunity to get some funding for the idea and they hacked together a business plan over the weekend. Just a few months later, in the middle the of the .com boom, armed with the weekend business plan in tow they had secured a million and a half in funding.

"Which is just how it was done back then” laughed Westergren.

With some seed capital in the bank, Westergren and Kraft went about the ambitious task of categorizing 450 individual attributes for thousands of songs. Everything from instrumentation, voice, and melody to harmony, form, and rhythm. They hired 75 musicians to listen to dozens of songs each day and assign rankings for every single attribute with pen and paper.

About a year later, they had identified and ranked minute musical details of over 10,000 songs in a massive excel spreadsheet. Pandora’s first technical hire was tasked to create a complex macro formula which would “match” songs by order-ranking individual similarities to every song in the database.

The first song they plugged into the spreadsheet? An early Bee Gees song; which much to the inital dismay of Westergren was matched with a Beatles song. Despite a personal bias against the Bee Gees, Westergren admitted the song chosen by the spreadsheet was musically a perfect match. The project worked! Time to raise more funds and take the technology to the world.

Or time to think again… Unfortunately, it was 2001 and finding funding especially funding for music in the midst of the Napster shut down was impossible. Westergren had no choice but to ask his 50 employees to work for “deferred” salary. He stated “we were too cheap for a lawyer so I didn’t know it was illegal at the time”.

Miraculously, in March of 2004 after pitching Pandora 348 times Westergren had raised $9 Million. Over what are probably the 3 worst years of his life, he had accrued 11 maxed out credit cards, $500,000 in personal debt, $2 million in back payroll and 5 employee lawsuits.

They then basically relaunched the business and were finally able to make Pandora’s potential a reality. In November 2005 they launched their full free service to the public and it exploded. Fueled by the smartphone revolution started in 2007 with the release of the iPhone. The world was finding and hearing music they had never heard before.

Westergren believed that a “strong shared sense of purpose” is what ultimately kept the company alive. He had a deep love of music and felt Pandora could reconnect and rekindle the worlds love of music.

We have a hard time staying connected to music. It’s hard to listen at work. The radio doesn’t play everyone’s taste in music. Pandora would allow people access to their favorite kind of music paired with an amazing discovery engine for finding new music

The state and future of Pandora today? With over 140,000 artists played each month, 80% of which have never aired on the radio it’s apparent that new music discovery will still be paramount. Westergren’s vision however, is to use Pandora’s technology to richen the connection artists have with their fans.

He hinted at a future (quickly arriving) where artists could pull up their listening stats for a city en route between big shows, quickly create a short ad about an impromptu show, have that ad air only to their listeners, and then play a performance to an intimate audience the same or next day.

Whatever the future of music apps may be, it’s clear that they will need to deeply connect us to our music, our artists, and give us ample space for exploration.

To end, I’ll leave you with Westergren's attempt to remember the speech he gave to 50 employees to get them to work for free for 2 years:

We all know here, that what we’ve created is unique and it's solving a gigantic problem. No one on earth is going to do what we’ve done and when you use this product we all know how magical it is. It will find its home. Everyone on the planet loves music, there are millions of musicians that produce great music and they can’t find each other.  When this thing finally finds it's home it will change culture and how  many times in your life do you have to do that?