Steve Case - Building Silicon Valley Outside of the Valley at TechCrunch

As I checked into the TechCrunch Disrupt NYC 2017, I bumped into Steve Case, the founder of AOL Inc. and the author of the New York Times bestselling book: The Third Wave: An Entrepreneur’s Vision of the Future, who told me he was here as a speaker for a talk for titled “Building Silicon Valley Outside of the Valley.”

Steve Case is now the Chairman and CEO of a Washington, D.C.- based venture capital investment firm called Revolution Ventures LLC and is trying to find disruptive and interesting startups in cities outside of New York and Silicon Valley.

Case reminded me that “Last year, 78 percent of venture capital went to just three states—California, New York, and Massachusetts,” which  leaves “the entrepreneurs in the 47 other states fighting over the remaining 20 percent of VC money available.” He also says that most VC’s in California or New York don’t feel comfortable investing and sitting on the board of a startup if they can’t easily visit them via train, car or, [dare I say it?] a bicycle.

In each city he gave an entrepreneur a $100,000 investment.  To get the investment, local startups competed in a pitch competition like Startup Grind’s Global Conference Quick Fire pitch. 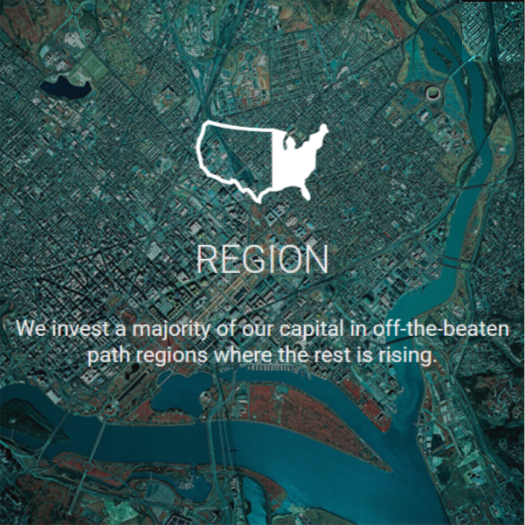 Case tells us that in the cities he and partners have visited, there are some underrated early seed investment startup opportunities that are working on fascinating things.

As an example, places St Louis, Missouri, which the industry leader Monsanto is headquartered in, he has seen a healthy agricultural (AG tech) startup culture developing there. He said you may not know it but there are 5 unicorn enterprise software startups in the Provost Salt lake City, Utah area.

Although Uber, the unicorn startup is headquartered in SF, much of their driverless car technology research and technology was done in Pittsburg because of the talented tech community from the prestigious Carnegie Mellon University.

According to Case, there are two big reasons investors should look to communities outside of Silicon Valley and other well-known tech hubs of innovation.

One reason is that it’s better for the country. “It’s better if we don’t have all of our eggs in one basket,” he said The other reason: It’s better for investments and investors. In places outside of Boston, SF, NYC and Silicon Valley, he said that “startup evaluations were 35 percent less due to the fact that there were a lot less VC’s competing to get into the investment round, which can be an upside for the investors that do.”

Investing in the more traditional startup cities, he says, requires a lot of capital, and there’s a lot of competition. But in places like Cleveland, startups need less to get off the ground, affording them a good chance of success.

The Takeaways on How More Cities can Grow their Startup Communities

We are in a moment in time, if you look at the arc of the American story, the United States was once a startup, 250 years ago. We led the way in the industrial and agricultural revolution.  “It’s also worth remembering that Detroit, 75 years ago, was like the Silicon Valley,” said Case. “At the time, it was the hottest innovation city in the country, because the automobile was the hot new technology at the time. Silicon Valley was full of fruit orchards.”

“The key to growing the startup communities in other cities,”  he says, “is to capitalize on the unique skill set of each city.”  There are now dozens of regional micro VC funds popping up all around the country in different midwest cities.

Everything Begins With The Local Community

“When local investors put money into startups, it signals to outside investors that the company is worth their time. Everything begins with the local community," Steve proclaims.

After reading Steve's book, The Third Wave, I can recommend it. It came out in April 2016. This book tells us how to really integrate the internet in a better, "seamless and pervasive way."

We all know that the internet can change how we think about all parts of our lives. Case tells us that it will not just change thinking, but that it will require a whole different mindset -- and that whole sectors of the country and economy will be effected -- including food and healthcare.

In the book he also says that without investment and partnerships, AOL never would have gotten off the ground, "It's about the partnerships."

For building your early startup, build it where you are living now. Thinking you have to move to a big place wastes your time and money -- but most of all -- it wastes the valuable energy that only you have to invest in your startup. Energy your startup needs.

It starts with the angel investor network’s (former entrepreneurs) and then getting these people to find out about what you are building. In this third wave, it’s not just about the app or software, if you really want to revolutionize health care it’s not the app, it’s about working with the doctors, hospitals and health plans.

As a new startup, it’s about creating that network effect to attract that early capital, and you have to educate investors who on the coasts to what happening in your city.

We are seeing a slowing of the brain drain in these Rise of the Rest Cities, so if you are a successful investor in NYC or SF maybe it’s time to go back and take a look at your own hometown.

I cover and write about topics such as entrepreneurship, conversion optimization, digital marketing tips and strategies for the startup and investor community.    Co founded Vab Media a digital marketing startup agency in New York.  I consult VC backed startup businesses with Internet marketing guidance. A known growth specialist, aiding companies with the expansion of their branding, visibility, and customer experiences online through a variety of strategies. I build and optimize many profitable websites, some of which hold first page rankings for major keywords in Google. I have experience with writing branded content for search. I also specialize in identifying and capturing profitable niches across a wide variety of subject matters. Generally helping companies 'ring the cash register' online. I lead our data-driven SEO team providing strategy, overseeing processes, providing training and testing the latest SEO strategies to improve conversion and revenue for all of our clients. I have been interviewed and quoted in the Wall Street Journal, ABC News, LA Times and Bloomberg BusinessWeek. A contributor to Entrepreneur Mag, The Next Web, Econsultancy, Tech.Co Startup Grind, and Google for Education.