Share on TwitterShare on FacebookShare on LinkedInShare on PinterestShare via Email
Àlex Rodríguez Bacardit | 2018-05-28T18:00:00+00:00

At Startup Grind, we are really keen on nurturing our local ecosystems through our global network of chapters all around the world. As of this writing, we’re 365 chapters in 115 different countries… and counting!

This post is a follow up to the The Address of The State of The Nation of Startup Grind, written by yours truly a month ago. We will be posting these more regularly to raise awareness of what we’re doing around the globe!

Let’s break it down in regions!

Europe and Middle East are home to some of our longest-running & strongest chapters out there, such as London, Tel Aviv, Barcelona, Stockholm or Dubai.

Want to read about some particularly impressive landmarks? Let’s see!

In Barcelona, amidst of all the political turbulences, we managed to pull our 50th event in 47 consecutive months. Not only that, but we had a full house, and learnt from Carlos Trenchs, director of dayone, the entrepreneurship division of CaixaBank. Carlos used to be the managing director of Caixa Capital Risk, one of the top Corporate VCs in Europe, and he himself is the man who’s managed more venture deals in Spain of all time. In Barcelona, too, we hosted Typeform’s CTO Toby Oliver back in December. When confronted with our usual question “how can we help you?” he let us know that he was looking for another challenge in his career. After scouting in our network, we found him a new job in a really promising startup.

Another fantastic landmark concerns our man in Sweden, Mr. Jonas Almeling, who turned five years old in the organization this month! Happy birthday and to many more years among us! Enjoy your healthy meal: 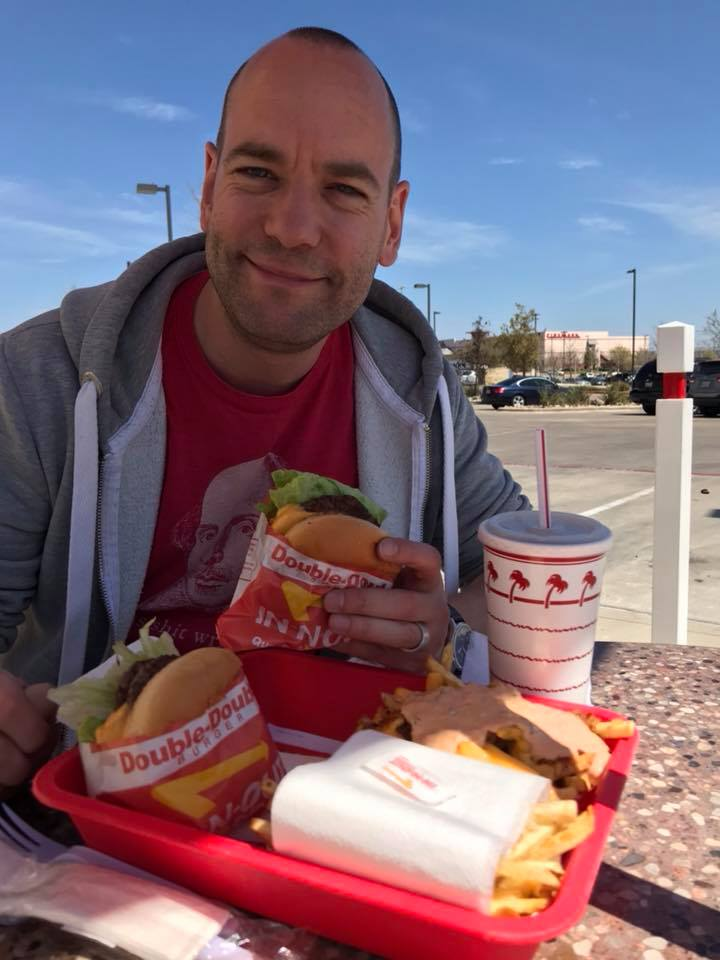 Full house events are also one of the trademarks in Tel Aviv and Eilat, both in Israel: 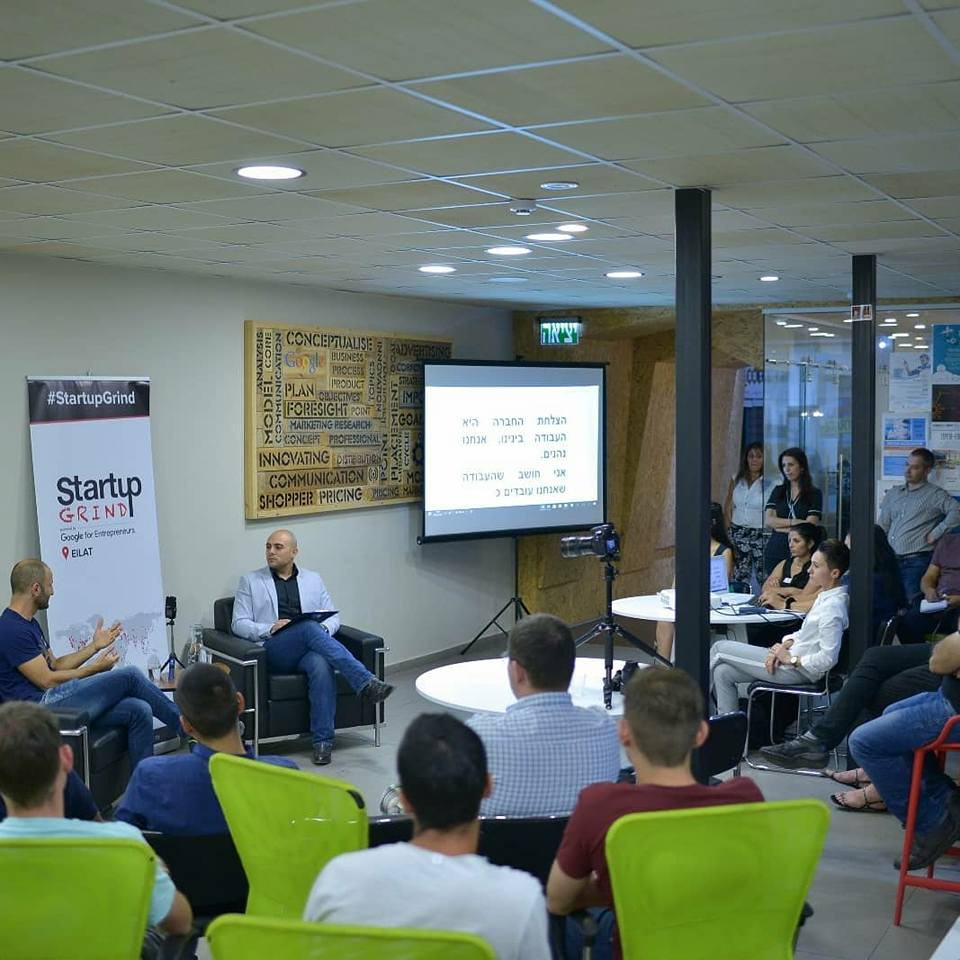 And Tirana (Albania) who don’t get enough credit for the amazing work they’ve been doing for quite a while now: Zurich never fails to deliver, thanks to David and his impressive team. Crowdhouse were interviewed two years ago at Startup Grind Zurich, and the company has grown so much afterwards, that they decided to host their events. How cool is this? 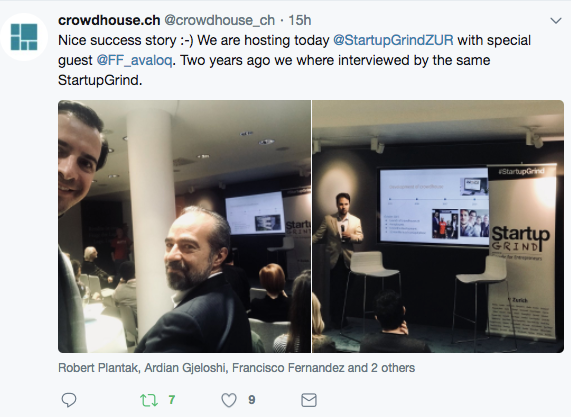 Not only that, but in the event, David talked to one of the investors in the company, who sold 30 percent of his shares of over a billion USD! Time to interview him, I guess!

This month of March, one of everyone’s favorite chapters, the small-but-kickass Gibraltar has turned one! Happy birthday, Denise & team! She celebrated it by hosting our friend Ferran Martínez, former Spanish basketball legend, who’s now a serial entrepreneur & investor and our chapter director in Andorra! 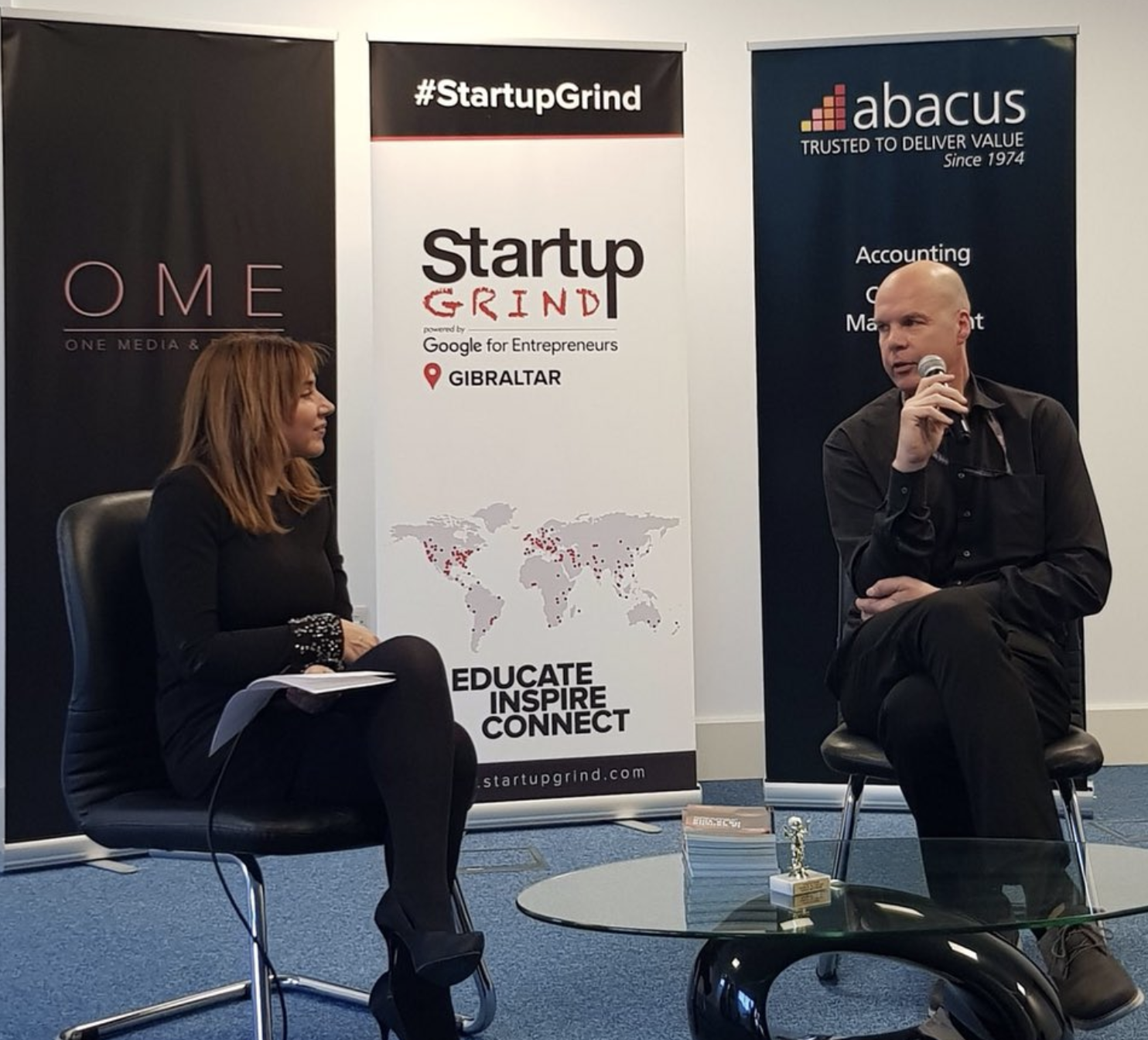 Here’s the video of all the events in Gibraltar so far! Very nice!

We love it when cities collaborate with one another. In Italy, the whole Startup Grind Rome team went and physically brought a speaker to the Ancona chapter. This is a fantastic example of our values of helping others before helping themselves: 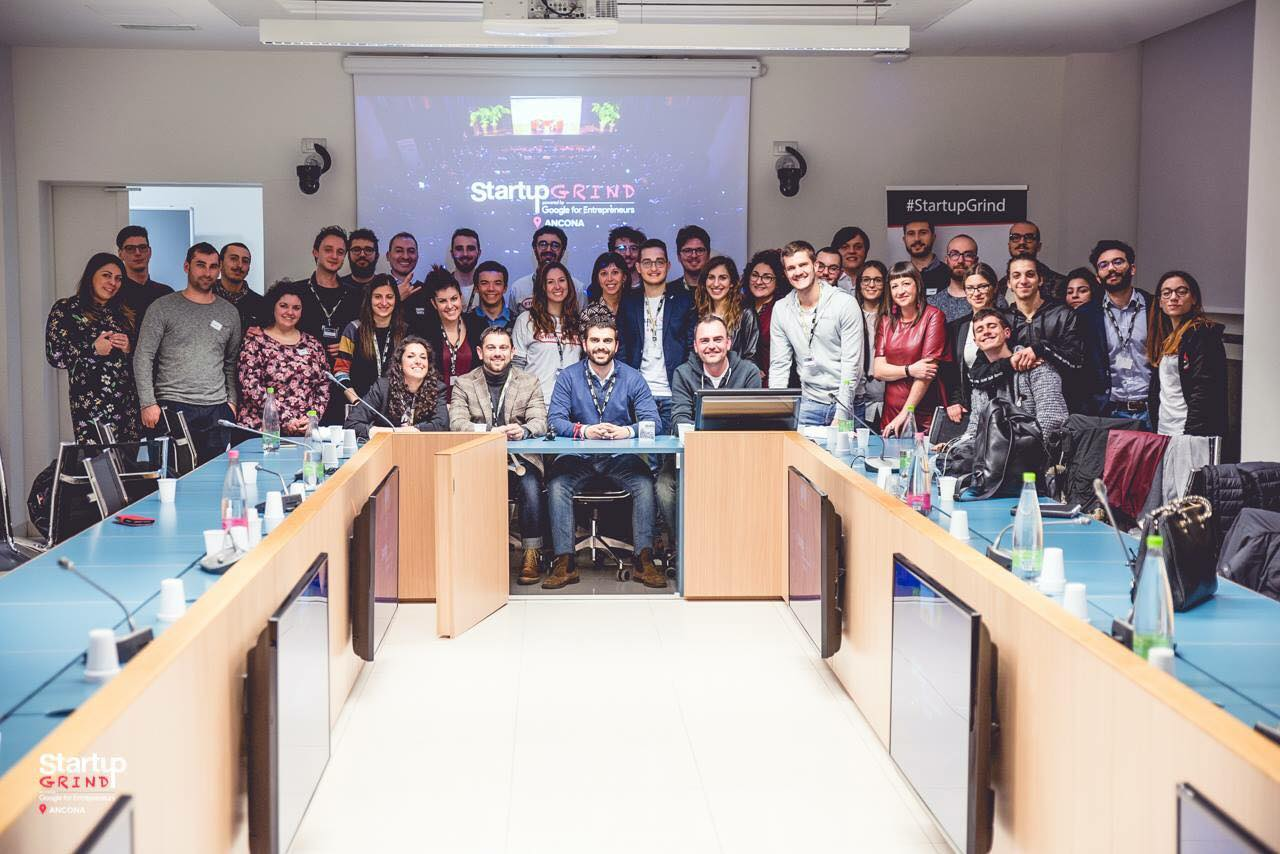 But Rome, oh, Rome! They don’t stop here! This month, they have also managed to organise a masterclass about entrepreneurship in Italy for the Florida International University and the University of Central Florida: 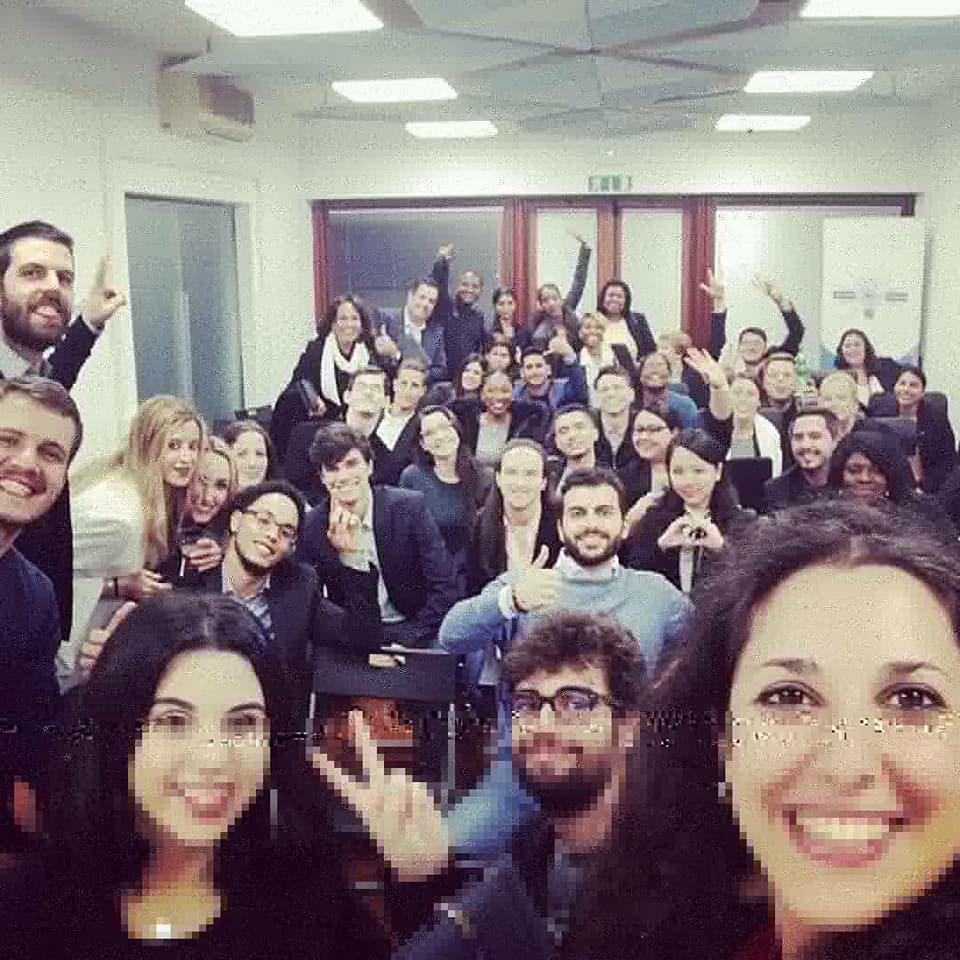 They’re obviously so excited that the picture came out half pixelated ;)

Other good news from Europe is that we relaunched one of our favourite cities, Berlin, with a 100% female team! 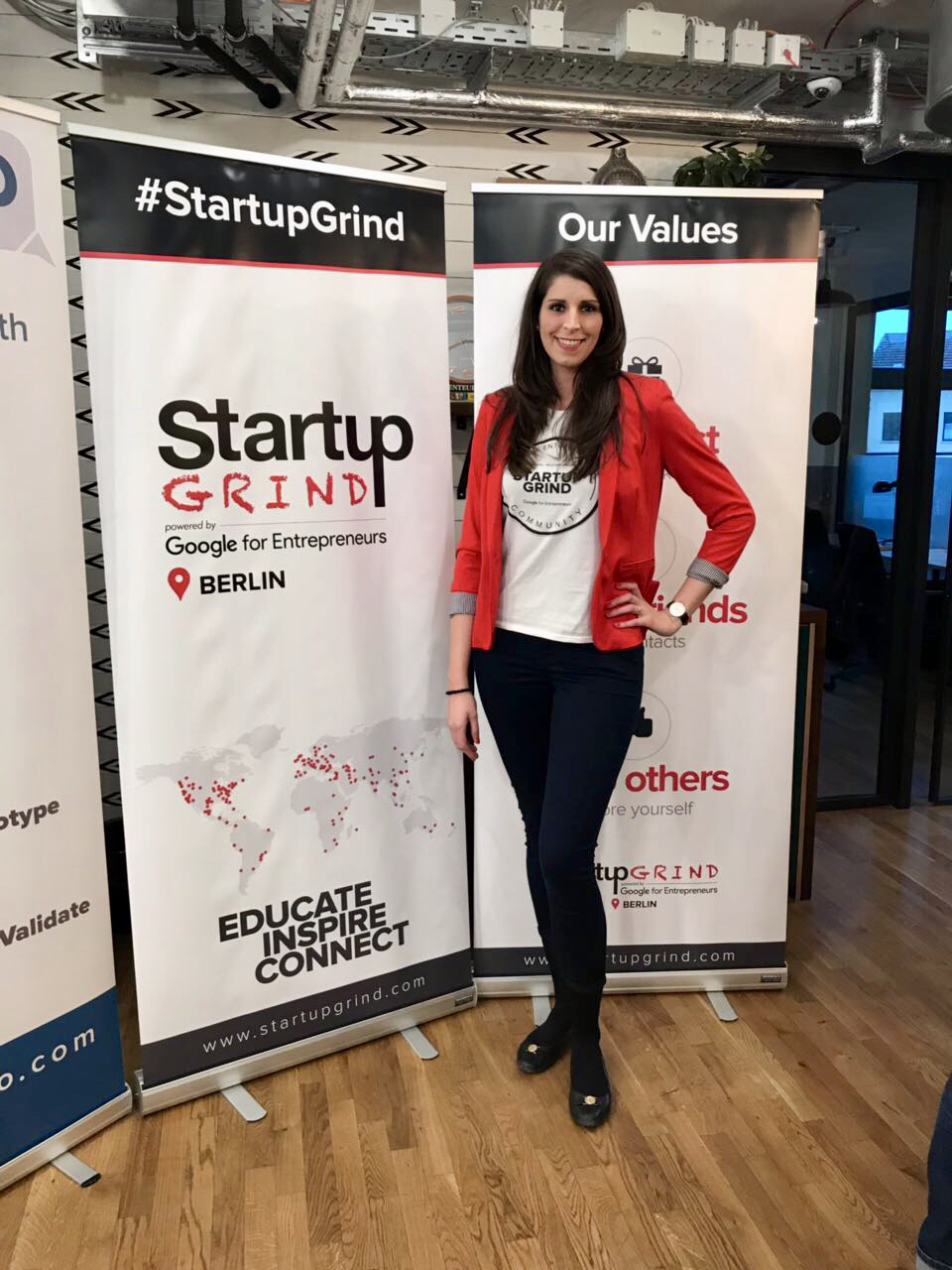 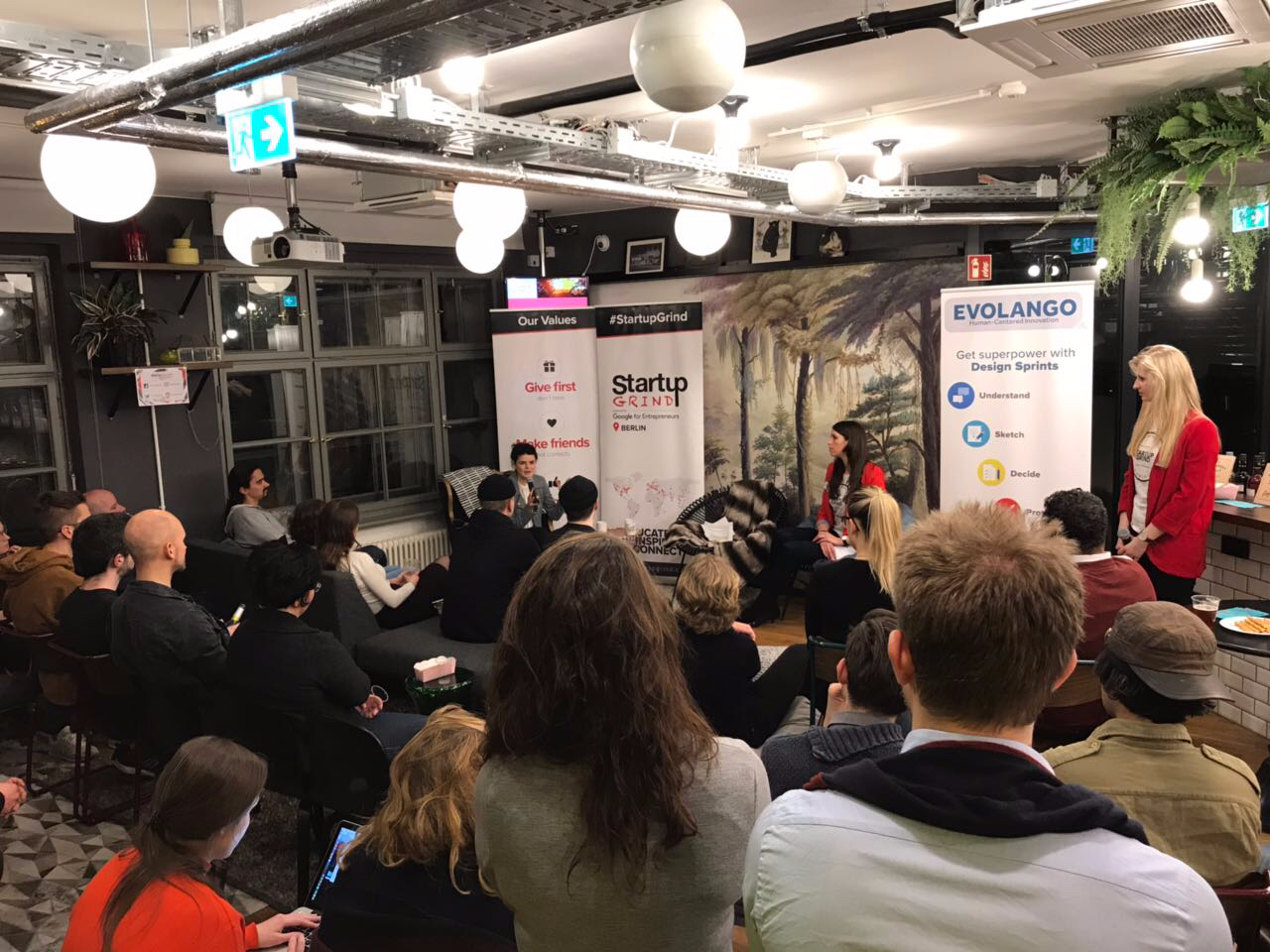 But Europe isn’t all about big & lively cities. We also have got chapters in really small towns. One of our favourites, Cosenza, in Calabria, Italy, probably one of the smallest chapters we’ve got, managed to pull their tenth event. Go, Francesco!

Africa continues growing year after year, and we are investing heavily in helping their local ecosystems to develop. In a year, we have opened eight chapters in Morocco and four more in South Africa! Those in South Africa are the following:

Way to go SA! If you’re from there, make sure to join their events! - oh and a shout out to their ex-president’s grandson Monde Zuma who's now running Pretoria like a boss! How many organisations have people related so closely to country presidents? Read about it here: http://ventureburn.com/2018/03/monde-zuma/

I feel like we’re talking a lot about South Africa, but they do deserve all this credit. In fact, in Durban, they made this amazing vídeo! https://www.startupgrind.com/events/details/startup-grind-durban-presents-we-are-hosting-david-de-villiers-founder-of-zapper#/

But let’s give some love to Morocco. Meet our team from Tangier! 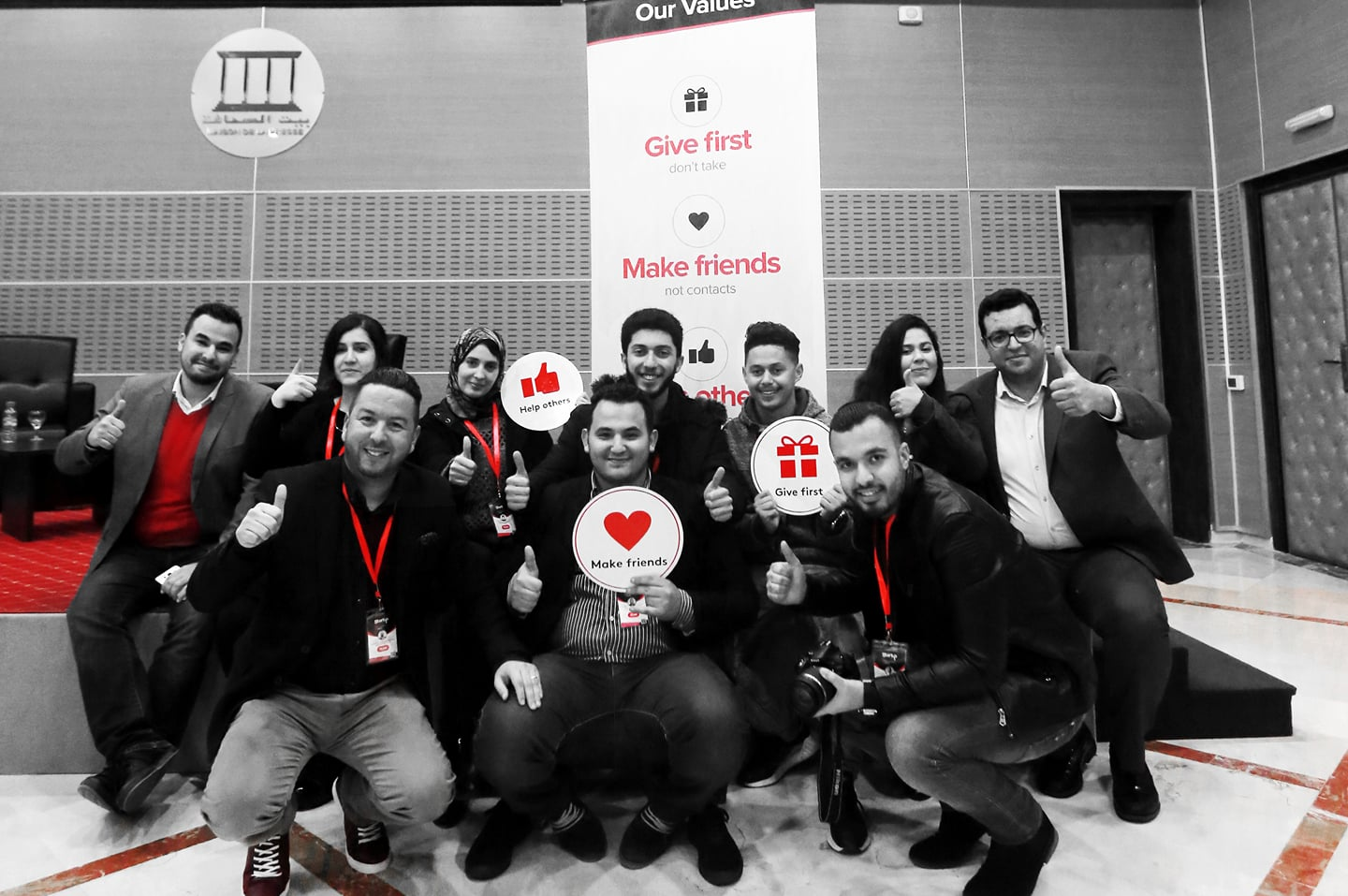 In Khartoum, Sudan, they joined forces with the local coworking space called 249startups to host another full house event: 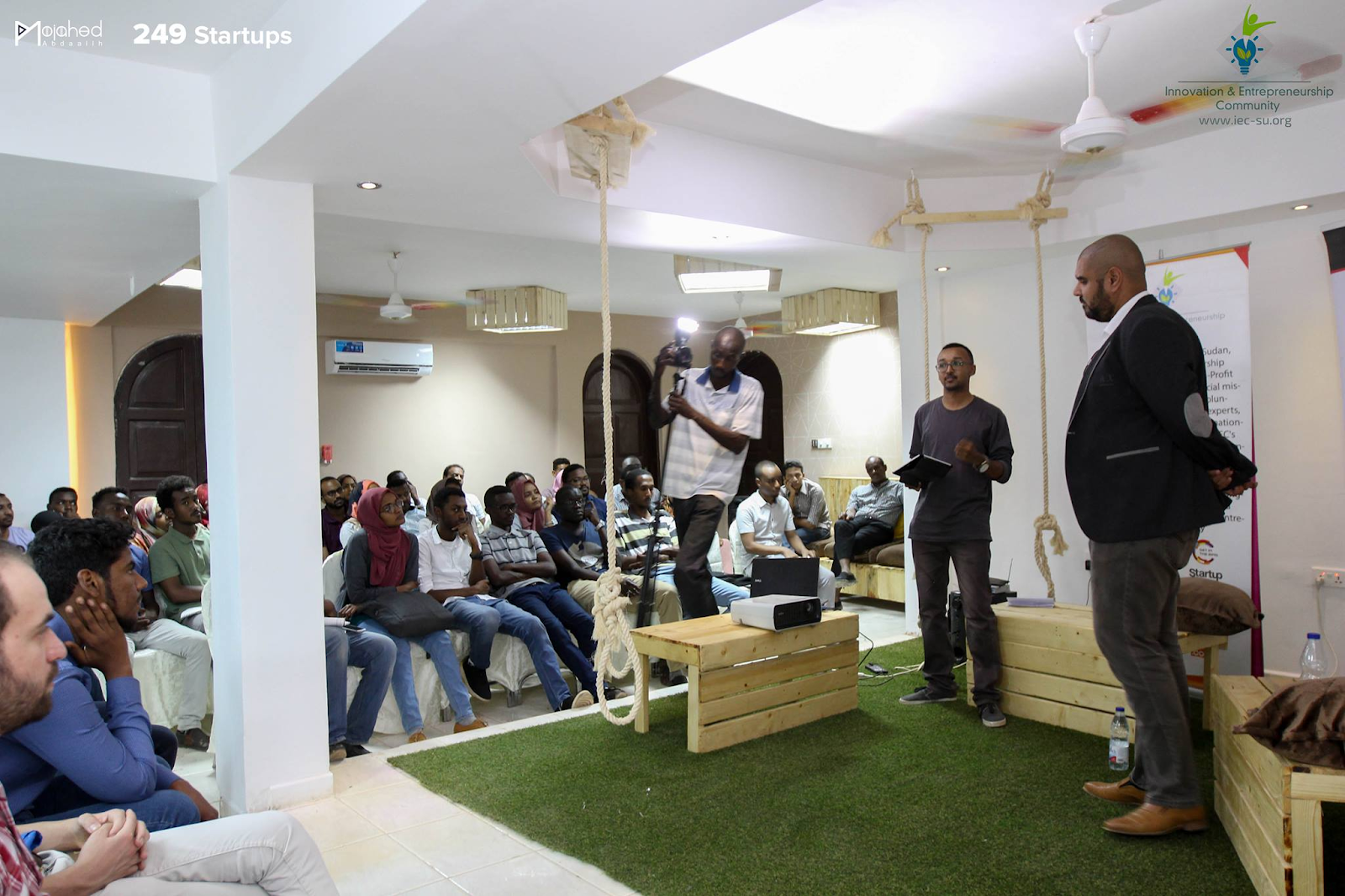 Another good example of us creating impact is Limbe, in Cameroon, which is working with Zixtech Organization to launch a startup hub in the city. They are soliciting resources, mentors for this new startup, and people interested to be part of the board. Should you be interested and / or willing to help, kindly let us know!

We are also supportive of the initiative of the Rwandan government to support local entrepreneurship. Therefore, we have launched a chapter in Kigali just recently. How about Asia? Solid continent, home to really good chapters (we do have a strong presence in China) but most of them are fairly recent. In fact, this is our ever-growing list of chapters in China:

Check them out if you’re nearby currently or even if you're traveling --Please drop by!

Before leaving China, we have to mention that our team in Beijing hosted successfully three sold out events this month! One of the most impressive achievements at Startup Grind, without a doubt! 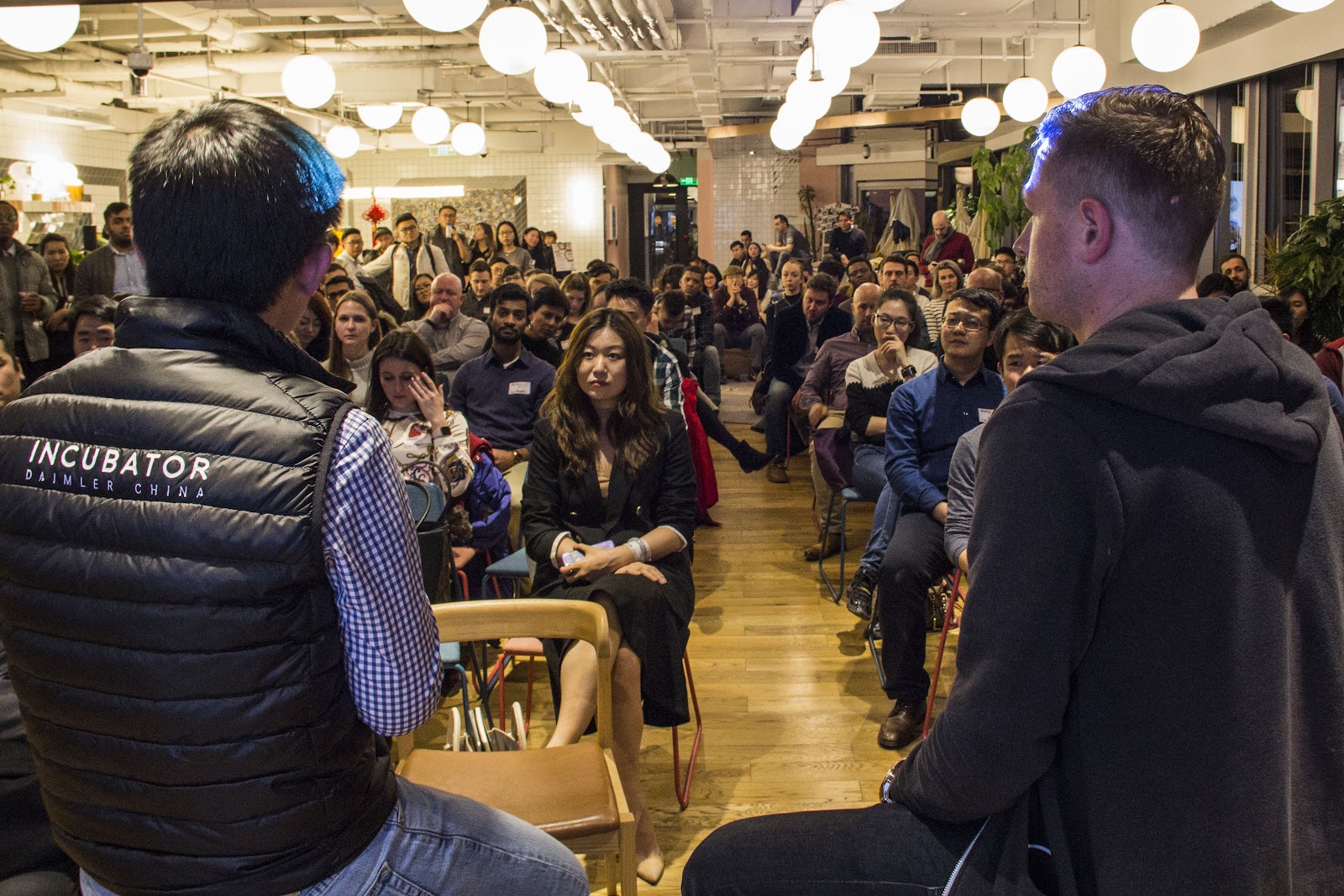 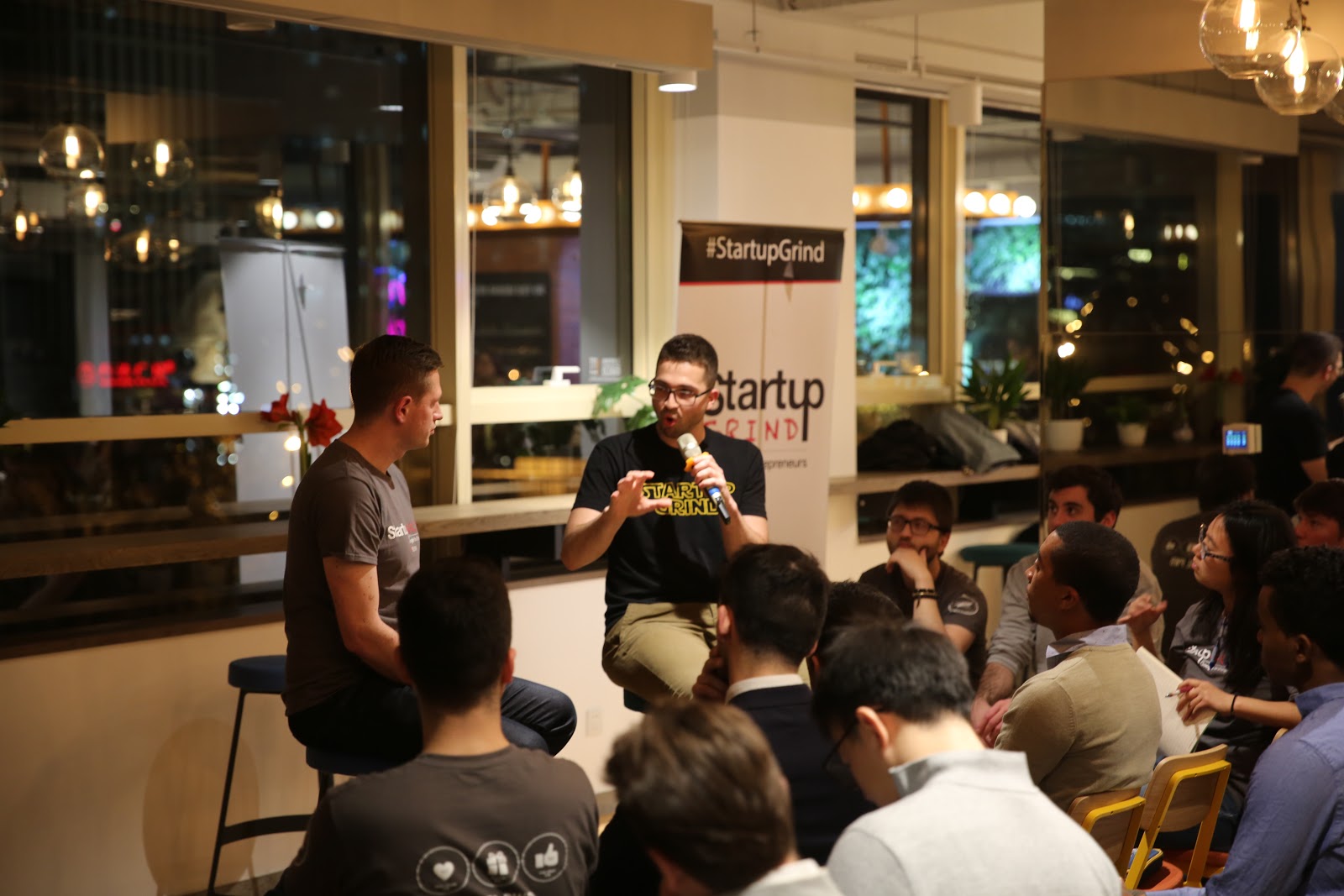 Kabul, in Afghanistan, had a full house this month! Something worth celebrating! 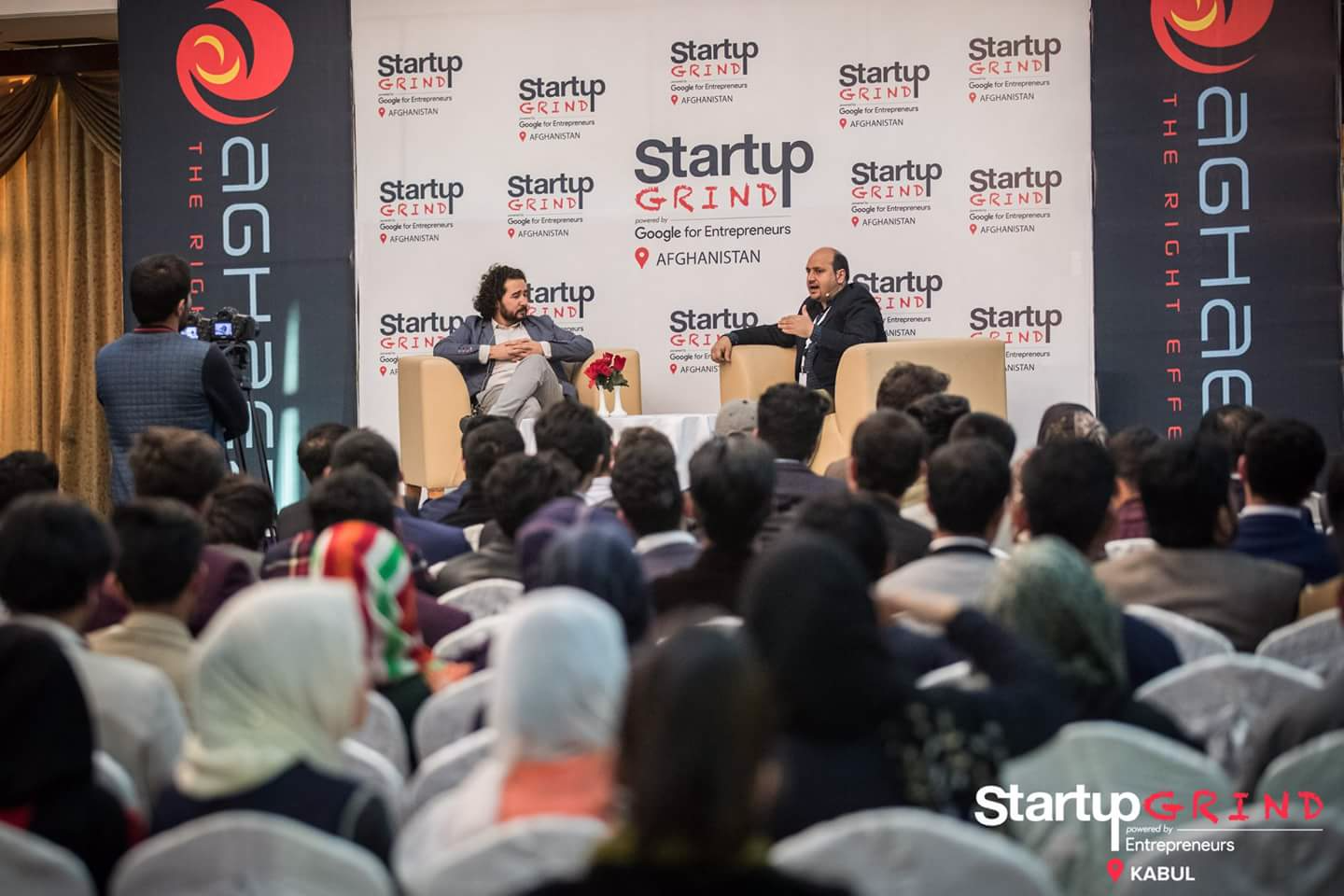 Here’s the video with their highlights:

Pakistan sent a startup delegation to our Global Conference in February. Those startups spent quality time in the Valley, meeting influential people, investors and learning from the founders of the region. If you want to learn more about their adventure, check the great summary they wrote on our blog about how Twenty-two Delegates Represented Pakistan at 2018 Startup Grind Global Conference.

Other landmarks include Lahore (Pakistan), on reaching their fifteenth event, Adelaide (20th), Bandung (5th), Jakarta (20th), Manila (30th)! Give it up for them :)

We love it when chapters go the extra mile and make it really personal. Instead of a cold office hosting institutional events, look at the setup for their first event ever in Loreto, Mexico (sold out, too!): 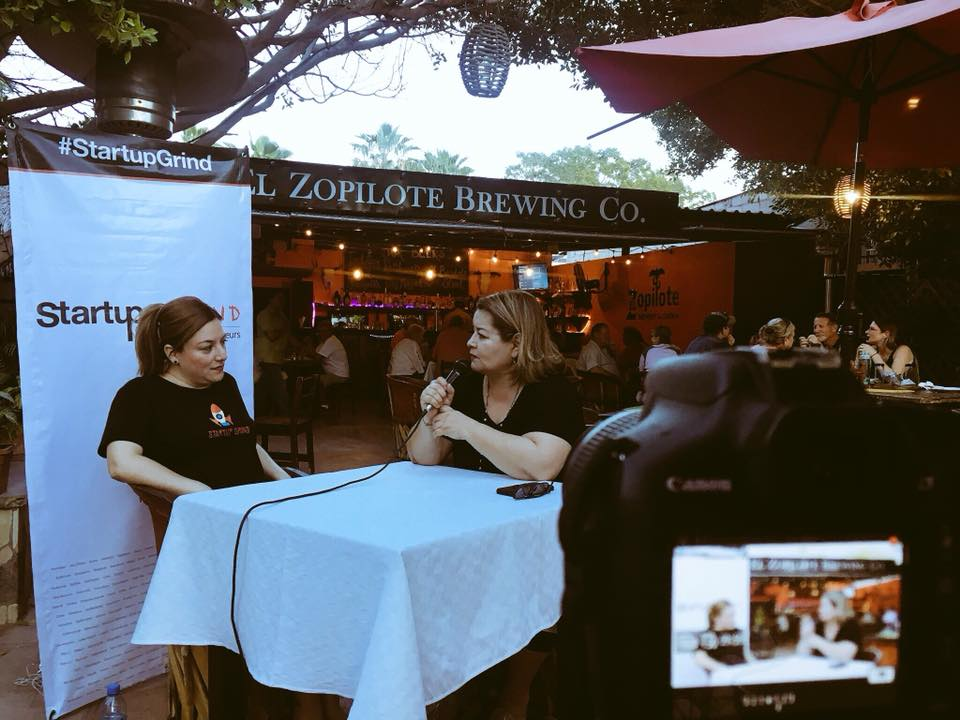 Startup Grind wants to help every entrepreneur in the world, and that includes other organizations and communities. Our Chapter Director in Las Vegas, Dru Blake, is helping the Startup Bus initiative to launch, so if you’re willing to lend a helping hand, contact him! 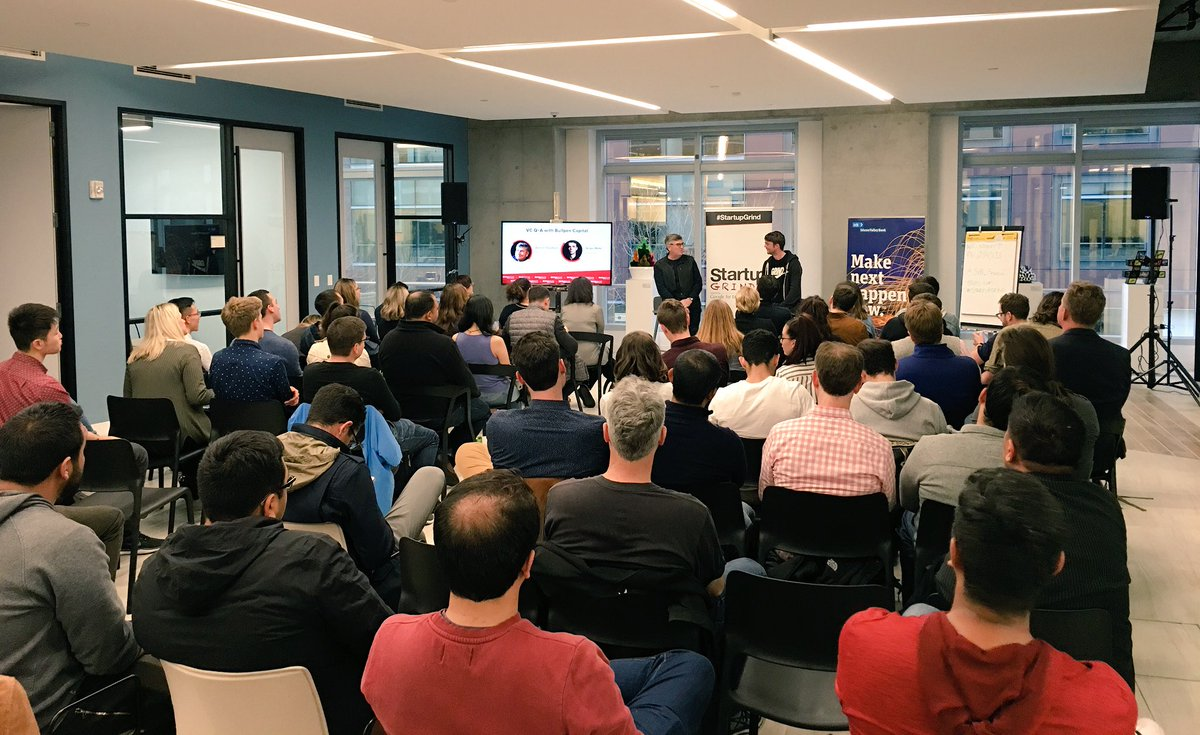 Santa Clarita, CA, started with a blast! Since September, they’ve hosted a series of impressive events and they’ve really become a major actor in their local startups ecosystem. Check their events and their videos on their chapter page!

On the account of making an impact, Louisville hosted an inclusivity channel in their last event with these kickass speakers: https://www.startupgrind.com/events/details/startup-grind-louisville-presents-inclusive-entrepreneurship-panel-ft-bjorn-k-simmons-kela-ivonye-kelli-jones-and-tendai-charasika​

Another cool event happened in Wichita, where we hosted an owner of a sports club (not your traditional startup!). Check the video with former pitcher and now owner of the club Nate Robertson.

To wrap it up, look at Toronto. Not only have they completed over 60 events, but their last one was with Wind mobile’s founder Anthony Lacavera, who got an impressive 1.6 B exit!

See you on the next edition!

If you like seeing this news here in the blog/article section -- please let us know @jelle, @g, @deanna all at startupgrind.com

CEO and Founder at MarsBased, and Chapter Director of Startup Grind in Barcelona. MarsBased is a 20-people full-remote development consultancy from Barcelona specialised in web and mobile applications developed with Ruby on Rails, React, Node.js and Angular. Àlex runs the sales/marketing area and is in charge of communications and growth of the company. His background in consulting and development (ex-Deloitte, ex-VASS) and his international profile helps him with the technical and the business perspective. His experience with volunteering (over 5 years at ESN) have helped him to build one of the strongest communities in Barcelona through Startup Grind, events for developers, curating Startup Digest, and managing a Slack community for entrepreneurs and startups in Barcelona. In his spare time, Àlex invests in early-stage companies, mostly B2B.